Robert F. Robinson, Sr., was born on April 17, 1961 to the legendary icon Ray Charles Robinson and gospel singer, Della B. Robinson.  Even though Robert grew up in the limelight of his father, he was a very quiet young man and spoke very few words throughout his childhood.  Robert did not possess the musical genius of his talented father, but he still wanted to share the musical experience with him, so at the age of 17 years old, he went on the road with his father as a roadie where he toured the world with him for many, many years.

Eventually, Robert chose to come off the road and return home because while out on the road, his son, Robert Jr. was born and he wanted to be an “at home father” to his son, which was something he did not experience with his own father.  Robert raised his son as a single parent working in various industries in the secular world from armored car/ATM services to surgical technician in hospitals.  It was at this time that Robert began to experience dreams and visions of himself in the ministry, this is when the Holy Spirit led him to a television program about patients afflicted with HIV and AIDS. The AIDS epidemic was being highly publicized through the media and it was at this time Robert knew this was the direction he was destined to go in to work with AIDS patients who were hospitalized.  He realized he had a special gift for helping those who were sick and afflicted. This began the path of his Hospital Ministry. Robert felt very comfortable and at ease with the position he had of helping AIDS patients especially when others shunned them because of their fear of this unknown disease.

His previous experience of working in the medical field gave him the edge he needed in order to be around and in close contact with very sick individuals.  His calling for the ministry helped him to comfort and pray for those who were in need.  Since then his hospital ministry has grown to cover all individuals who are sick or are experiencing some type of illness or hospitalization.  Rev. Robinson has earned a reputation as the Pastor who frequently visits patients to pray for and encourage them in their time of need.

Robert’s religious upbringing was attributed to his mother, who was an acclaimed gospel singer, so he grew up in the church.  He continued to attend church as an adult and it was at church service where Robert accepted his calling into the ministry.  Being very passionate about his call and serving God through his ministry, he does not allow anyone or anything to separate him from the love of God. Moreover, he answers with full persuasion, that neither death, nor life, nor angels, nor principalities, nor powers, nor things present, nor things to come, nor height, nor depth, nor any other creature, shall be able to detour him from his journey. So, he continued in his Christian education, by attending the American Baptist Churches School in Religious Studies and Theology.

Robert also had a passion for Aircraft's and wanted to work with airplanes, so he attended one of the best Aviation schools in Los Angeles, where he graduated top in his class.  Winning numerous accolades and awards, such as, Outstanding Student Award, Perfect Attendance Award, Outstanding Academic Performance in Hydraulic and Pneumatic Systems and the Outstanding Academic Performance in Non-Metallic Structures Award. After graduating, he landed a teaching position with one of the top-rated aviation schools in the country.  As a FAA licensed instructor, Robert had the golden ticket to work with aircrafts or teach others this craft anywhere in the world.  During his tenure as a teacher he continued to win awards, like the Director’s Award of Excellence and was promoted to Sr. Instructor, which was one level from the highest-ranking position of Master Instructor. Robert’s ministry began to flourish, during this time and he was appointed Pastor of his church. With this new appointment, his schedule became very demanding and it was challenging for him to juggle both positions, so he chose to walk away from his teaching career and focus all of his attention to his first love, the Ministry.

After making the decision to follow the path God had set for him, as the full time Pastor of Greater Faith Ministries and Schools, Inc., his life work became the ministry that he had practiced since 1988.  As Pastor, his first task was to purchase GFM’s own church building, which he did over 10 years ago and is blessed to still worship in today.  Greater Faith Ministries is a full Gospel, non-denominational church, and Rev. Robinson’s preaching is styled as teaching God’s Word, under the direction of the Holy Spirit. Since becoming Pastor, Rev. Robinson has instituted many new innovative ideas and programs and has continued to help many in need.  Every year since 1989, he has spearheaded the Feed The Hungry Program, a charitable food service program that has fed thousands of individuals and families during the holiday seasons. He instituted the churches first Mother’s Board, the Women of Color Services and GFM’s Youth Conference and Retreat. Pastor Robinson’s good work didn’t go unrecognized. He was featured in the Los Angeles Sentinel Newspaper as one of the Most Interesting Pastor’s in Los Angeles and he was interviewed by the University of Chicago, who were conducting a study on the effects of Pastor’s in the inner-city.

Living a good life for God, he relies on setting God always before him, because he knows that the God he serves will endow him with all strength to accomplish the task that has been put before him.  Pastor Robinson is a leader who characterizes a spirit of endurance, to show himself approved unto God as a worker that is not ashamed of the gospel of Christ.  He rightly divides the word of truth in his Christian lifestyle as he exemplifies to others the Love of Jesus Christ.  He is a Pastor that is connected to his congregation, by personally conducting Baptisms, Christenings, Homegoing Services, Marriages, Marriage Counseling, and visiting prisoners in the jail-house. In addition, Pastor Robinson’s leadership qualities speak for themselves through his unwavering love for the Lord as he conducts Adult Sunday School, Weekly Bible Study, Leadership Classes for Brotherhood, Deacons and Ministers, Men’s Meetings and he personally mentors the young adults, both male and females. As God continues to take him higher and bring him closer to Him, He constantly keeps him anointed in His power, increased by His love and walking in truth.  He has blessed Pastor Robinson to be a devoted husband to his wife, First Lady Rosa and a loving parent to his sons, Robert Jr. and Joshua Christian.   For it is in God that he lives, and moves and has his being so that he may teach the Word of God for others to have an intimate relationship with Him, so that one day they may see His face. 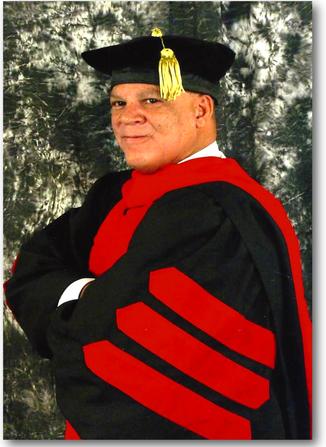